Musical events and their impact are often determined by scale. Huge lighting rigs, walls of LED screens and elaborate sets. David Byrne’s performance at the SSE Hydro, Glasgow, was anything but.

He dug up this formula and planted his own unique concoction of innovation, understatement and guile watered with pure sunshine. The atmosphere was electric and I overheard several people leaving the gig saying it was one of the ‘best concerts they’d ever seen’. It was, quite simply, incredible.

Byrne’s landmark ‘Stop Making Sense’ documentary concert proved that he was a master of performance and invention. In this American Utopia tour, he’s lost none of his verve.

The set was clean and minimal, consisting of three walls of hanging silver beads, down-lit at their origin creating a box of light. It contained Byrne, barefooted in a grey tailored suit, sitting alone at a desk holding a model brain (yes, brain). He was joined minutes later by 2 identically dressed performers, who drifted in through the beads like ballet dancers adhering to no obvious beat.

Over the next three songs a further nine musicians (all barefoot with tailored grey suits) entered the fray, all without fixed instruments. The only fixing was of percussive and string instruments to the musicians bodies via straps and harnesses. Everything was performed using wireless technology. The carefully choreographed musicians were afforded the freedom of the stage by their lack of cords, creating an outcome more akin to performance art than a conventional music concert.

The full cast shimmied, shook and pranced their way through a glorious blend of classic, upbeat Talking Heads tracks to new solo material without losing their stride. This was a lesson in performance from gifted musicians and performers, subtly lit to accentuate every move with effortlessness. 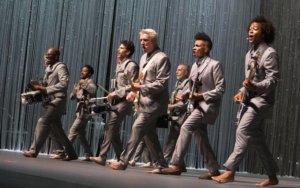 Across all the events I’ve witnessed, in any genre or discipline, this is arguably the one I’ve wanted to share with the most people. Not because it was a great concert, but because of how it made me and countless others feel. It was an achievement in understatement and deliberate simplicity. Innovative events don’t have to stimulate all your senses at once, just the senses that matter at the right times.